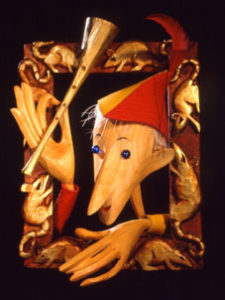 A puppet show for everyone over 5 years

Rats everywhere!
Then the strangest figure appeared, dressed
half in yellow and half in red.
“I’m able by means of a secret charm, to draw
All creatures living beneath the sun,
That creep or swim or fly or run,
After me so as you never saw!”

The windows and doors of our magical stage open to reveal the comical characters of Hamelin in this show based on the poem by Robert Browning. 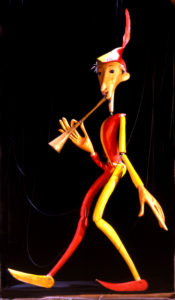 45 minutes of live voice, original music, intriguing sound effects and puppets of every type. Performed by 2 puppeteers for audience size up to 180.

As pure entertainment or educational when linked to a free talk/demonstration, or to a puppetry workshop.

Devon based PuppetCraft is one of Britain’s foremost puppet troupes.

Feel free to enquire about bookings, with no commitments. 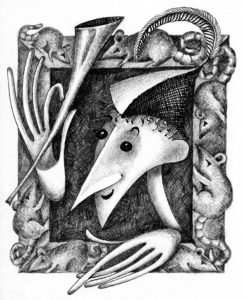 The Pied Piper by PuppetCraft

Buckfastleigh Town Hall, Devon.
I finished my last review of John Robert’s PuppetCraft, saying: “To boil it all down – a good night out for the whole family. I can’t wait to see their next production.” Well now I have seen The Pied Piper and I am happy to report that it was worth the wait. Another cracking show that, although on a smaller scale than Sir Fool’s Quest, easily came up to the same excellent standard.

A two-hander this time, and based on Robert Browning’s poem version of the well known tale, John Roberts and John Wilson have a small gem here. They treat the dark Victorian cautionary tale with light and fun but still push the moral through.

The set is an oversized booth with a multi- tude of performance spaces: a door folds down here to become the carpenter’s shop, a blind folds up there to reveal a confectioner’s kitchen. Roberts’ flair for design permeates the whole production. He uses recycled timber, simple clean shapes, hessian and feathers for texture and bold colours. The costumes of the puppets were particularly good, full of fine detail.

There are lots of different puppet styles used in this show. First we meet the story- teller, an old man in his rocking chair, played by a Bunraku style puppet. Then comes the carpenter, a rod puppet with human hands and his children – colourful fluffy things on sticks, and there are even some finger puppet rats. The piper himself is an exquisite marionette – rightly so some would say, the star being an example of the highest form of puppetry.

There was good use of music and, as in Sir Fool’s Quest, it was composed and performed by Ian Wellens. It set the mood perfectly. With clever lighting and good use of limited resources, the audience was completely enthralled.

The story itself is a tried and tested favourite. A strangely transparent lesson in practical economics, with strong political overtones: pay your debts or else something unbelievably horrid will happen to you. Browning’ s poem was cut to the bone for this production and happily so.

The use of classical poetry is a strong selling point for schools and parents and I for one am a strong believer in exposing kids to things they might not understand yet, to encourage them to learn. There is a whole new world of culture out there, if they can find a door and learn to appreciate it.

All in all another cracking show. Do catch it if you can.

Back to Past Shows

Back to Home Page