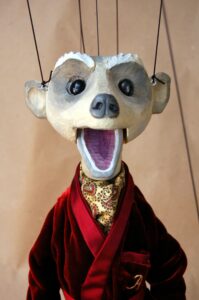 PuppetCraft made an Alexandr the Meercat puppet for the ‘Compare the Meercat’ campaign. The press have published lots of articles about PuppetCraft’s involvement.
Click to have a look:
Herald Express.
Swns news.
Metro. 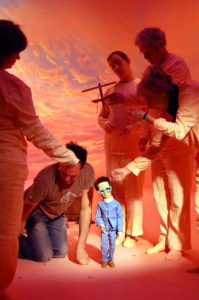 PuppetCraft made and performed a “Brains” puppet for a well-know TV advert for Drench. 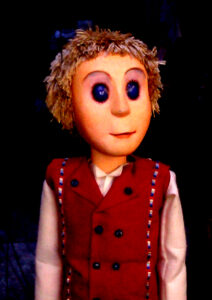 Carved marionettes for the Little Angel Theatre’s production of The Snow Queen. Carved puppets for The Little Angel Theatre and Royal Shakespeare Company production of “Venus and Adonis”- an adult puppet masque. Designed, made and directed puppets for “All Change!” at The Anvil, Basingstoke: a large scale music-theatre production. Made a Chinese style Marionette on commission. John was commissioned to make an interactive puppet, with moving head, arms, legs and interchangeable face parts, for a Hands-on-Art project.

Made a puppet caricature of a 10 year old, who had new trainers!

John Roberts took on an apprentice for 6 months, on a Europe funded project. Awarded an “Year of the Artist” grant to run residencies in rural villages, as part of the national program. Worked with Ian Wellens, composer.

1996: Consultant at the Haydn Festival in Austria

Technical and lighting consultant for a puppet opera at the Haydn Festival in Austria, with Trevor Pinnock’s English Concert orchestra and The Little Angel Theatre. Consultant and maker for the film “The Adventures of Pinocchio” – carving a marionette used by Jim Henson’s Creature Shop as a “model” for Pinocchio. Designed, made and directed puppets for David Wood’s “Rupert and the Green Dragon” which toured nationally in large theatres. Made and directed a Christmas show for Norwich Puppet Theatre: “Hansel and Gretel”. PuppetCraft designed, directed and made a contemporary puppet-music-drama -“The Bet” presented in London at the South Bank, Almeida Theatre, in Norwich and at the Huddersfield International Contemporary Music Festival. Music by Erika Fox, text by Elaine Feinstein. Performed by the Feinstein Quartet, a narrator and 2 puppeteers.

“Puppet theatre and contemporary music go together like silent movies and busking at the piano. The Bet premiered at the Purcell Room deserves to start a trend”. Independent John was Deputy Director of the Little Angel Puppet Theatre in London for 10 years, making, performing and coordination tours to international festivals. John Roberts won a Puppet Centre/Arts Council scholarship to study the secrets of Chinese puppetry in China at the Quanzhou Puppet Troupe.